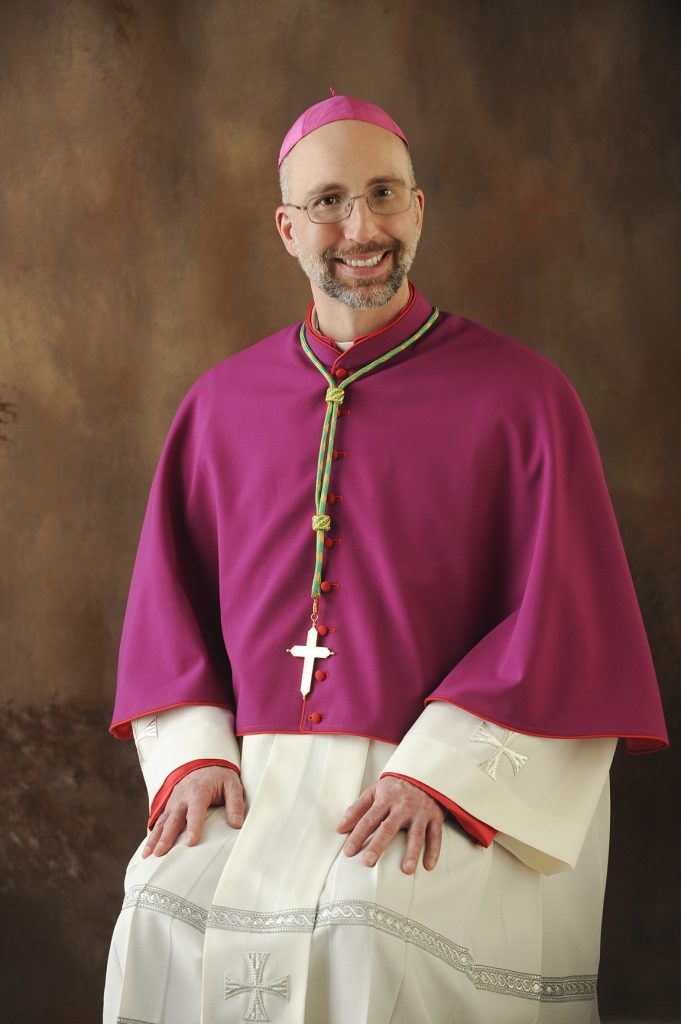 Bishop John F. Doerfler was ordained and installed as the 13th Bishop of Marquette on February 11, 2014.

Bishop John F. Doerfler was born on Nov. 2, 1964 in Appleton, Wisconsin, the son of the late Henry Doerfler and Germaine (Mancl) Doerfler. He graduated from Appleton West High School in 1983 and earned a bachelor’s degree in philosophy and classics from the College of St. Thomas in St. Paul, Minnesota. He then became a seminarian at Gregorian University in Rome, where he graduated with a bachelor’s degree in sacred theology. He was ordained to the priesthood on July 13, 1991.

Bishop Doerfler’s first priestly assignment was as parochial vicar at St. John Nepomucene Parish in Little Chute, Wisconsin from 1991-1995. He then spent the next two years earning his licentiate in canon law at The Catholic University of America in Washington, D.C. When he returned to Wisconsin, he was appointed defender of the bond for the Tribunal of the Diocese of Green Bay and parochial vicar of St. Francis Xavier Cathedral in Green Bay, while earning his licentiate in sacred theology from John Paul II Institute for Marriage and the Family. He went on to earn his doctorate in sacred theology from the same institute in 2008.

Other diocesan positions held by Bishop Doerfler included assistant chancellor, judge for the Tribunal, chancellor, and vicar general, a post he held since 2005. In the past he also served as administrator of Holy Trinity Parish in Casco, St. Francis Xavier Cathedral and St. John the Evangelist Parish in Green Bay, and St. Joseph Parish in Sturgeon Bay. He was also sacramental minister of St. Francis Xavier Cathedral and Ss. Peter and Paul Parish in Green Bay, as well as St. Martin Parish in Cecil. In addition, he served as rector of the Shrine of Our Lady of Good Help in Champion, Wis. and was a part-time lecturer in moral theology at Sacred Heart School of Theology in Hales Corners.

Bishop Doerfler has written several articles on medical ethics for various publications. Organizations he has worked with include Teens Encounter Christ, Courage, Widows of Prayer and Retrouvaille. He has also done some Hispanic ministry, taught diocesan lay ministry formation courses, offered adult education conferences, was retreat master at Holy Name of Jesus Retreat House on Chambers Island, and served one term as chair of the Marriage Research Committee of the Canon Law Society of America.