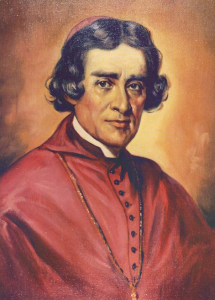 The first Mass in Marquette was celebrated by Father Menet, S. J., in a log cabin located on what is presently Spring Street.  Thereafter, on occasion, the city was visited by the Jesuits stationed at Sault Ste. Marie.

On October 12, 1853, Bishop Frederic Baraga visited the city, confirmed 30 persons, and selected the site for the construction of a new church. This site is where the present St. Peter Cathedral stands, the corner of Baraga Avenue and Fourth Street.

The first resident priest, Father Sebastian Duroc, was instructed by Bishop Baraga to leave Mackinac Island in the late Fall of 1856, to proceed to Marquette and to begin the work of constructing this new church. It was a very arduous journey, via dog sled, traveling through the winter snow and ice and finally arriving in February, 1857. In the Spring, Father Duroc oversaw the beginning of construction of a two-story frame building on the site at the rear of the present Cathedral. The upper part of that building he occupied himself and celebrated Mass in the lower section.

The second pastor, Father Thiele, arrived in July of 1864 and began the construction of a fairly large church, knowing the Diocesan See would be transferred from Sault Ste. Marie to Marquette. This church, which would become the Cathedral, was a frame structure of Gothic character based on a stone foundation. Bishop Baraga laid the cornerstone of this church and dedicated it in 1866 to Saint Peter, the Apostle.

The first Cathedral was a relatively pretentious building comparing favorably at the time with any church building in the State of Michigan. The cost of construction was $12,000.00. A considerable saving was made, by eliminating the sheeting under the siding.  As a result, it was almost impossible to heat the church during the winter months. In zero weather the wood furnace had to be fired for three days, night and day, to temper the atmosphere to even a tolerable degree. 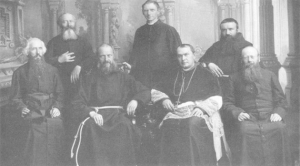 The next change in the Pastorate of the Cathedral was when Father Edward Jacker became pastor in 1866. Father Jacker was a most intimate friend of Bishop Baraga and helped nurse him through his last illness until the Bishop died on January 19, 1868. Father Jacker became the Diocesan Administrator and appointed Father Edmond Walsh pastor of the Cathedral.  Father Jacker remained administrator until Bishop Ignatius Mrak took up residence in Marquette in February 1869.

In 1870, Father Frederick Eis was ordained by Bishop Mrak and appointed pastor of the Cathedral.

In 1873, a Bishop’s residence was built in the rear of the Cathedral from Propagation of the Faith funds. In 1878, Bishop Mrak resigned and Father Jacker again became administrator of the Diocese and appointed Father John C. Kenny as pastor.

On September 14, 1879, the Rt. Rev. John Vertin was consecrated as the third Bishop of the Sault Ste. Marie and Marquette Diocese at St. Paul Church in Negaunee.  After Bishop Vertin’s consecration, Father John C. Kenny, being persona non grata to the new Bishop, was removed as pastor at the Cathedral.  As an act of vengeance for Father Kenny’s removal, the Cathedral was set on fire, presumably by some of the parishioners, on October 2, 1879.  Bishop Vertin, returning from Negaunee, was greeted by the glare of his burning Cathedral. 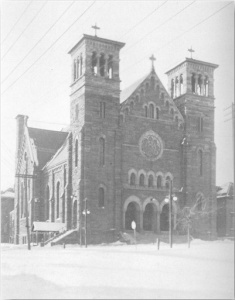 During the time of the construction, the parishioners of St. Peter continued to use the French Church. This arrangement soon proved to be inadequate to cope with the needs of the two congregations. Since the Cathedral was far from being completed, arrangements were made to finish the basement and use it as a church.  This was done and the first Mass in the “new” Cathedral was celebrated by Bishop Vertin at midnight on Christmas Eve in 1883. The basement continued to be used by the parishioners until July 27, 1890, when the new sandstone Cathedral was consecrated.

Father J. Langan became the first Pastor of the “new” Cathedral in 1890. During his pastorate, a new rectory was built next to the Cathedral at a cost of $4,000,000. 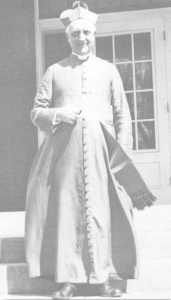 In 1899, Father Joseph G. Pinten became pastor and served until 1916.  Father Pinten eventually was designated Bishop of Superior, Wisconsin, and was consecrated on May 3, 1922 in St. Peter Cathedral. Father Henry A. Buccholtz was appointed pastor in 1915 and held this position until his death in 1945. Bishop Frederick Eis, who had followed Bishop Vertin, died on May 5, 1926 and was succeeded by Bishop Paul Joseph Nussbaum.  In 1922, a new rectory was constructed at the West side of the Cathedral under the direction of Father Buchholtz for a total cost of $25,000.00. This is the present rectory.

On May 16, 1929, Father Buchholtz was elevated to the position Monsignor.  He was later raised to the rank of Protonotary Apostolic on July 7, 1934.

In 1930 a tunnel was constructed between the Cathedral and the rectory. As was the custom in many churches prior to this time, the deceased parishioners were often buried in the Church yard. As the tunnel was being dug underground, coffins often settled through the top of the tunnel. An undertaker was called in during the evening hours and these coffins were quietly transferred to the cemetery on the outskirts of town. 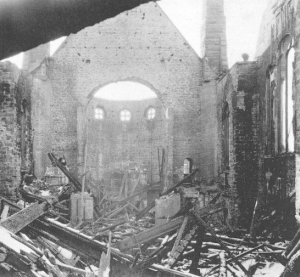 A second fire strikes the cathedral on November 3, 1935.

Bishop Nussbaum died on June 24, 1935, and Monsignor Buchholtz became administrator of the Diocese. A second fire struck the Cathedral on Sunday morning, November 3, 1935, at 4:04 a.m. The safety of the Sacred Vessels was the first concern and Monsignor Buchholtz, with the aid of a fireman, succeeded in getting the tabernacle key from the sacristy. Father – Francis Scheringer and Rock Beauchamp, the Cathedral’s custodian, were then masked and tied together by a rope, and fought through the smoke and reached the main altar to bring out the Sacred Vessels. As they reached the safety of the outside door, flames leapt out of the eaves and shortly thereafter, the roof and floor collapsed.

The next morning Mass was celebrated in the auditorium of Bishop Baraga High School. The auditorium of the high school was used for many months until the basement of the new Cathedral was completed and ready for use for the celebration of Mass. 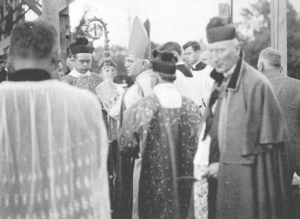 In January 29, 1936, Bishop Casimir Plagens was appointed Bishop and was consecrated at the French Church due to the destruction of the Cathedral. He named Monsignor Buchholtz Vicar General of the Diocese.

The actual restoration of the Cathedral began in February of 1936. It was larger in every way in that the steeples were higher and adorned with colorful blue and red domes with raised crosses covered with gold leaf. The nave of the Church was extended. A Bishop’s Chapel was added. In the sanctuary, they installed intricate grill work and furnishings of solid oak. Marble Altars were added as well as a Bishop’s throne of marble adorned with the coat of arms of Bishop Plagens.  The body of the Church was now supported by mammoth Romanesque columns. New stained glass windows portraying the mysteries of our Lord’s life were installed. New stations of the cross of intricate mosaic, framed in white marble, were added. All the new statues were of colored marble. The basement was redesigned as a modern hall complete with kitchen, storage and utility rooms to provide the parish with facilities for banquets and other activities with a capacity of 600 people.. 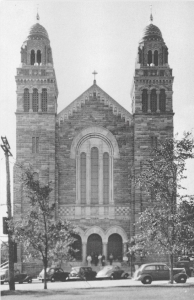 The building committee of this restored Cathedral included Anthony Pechaeur (Chairman), Harry Kelly, Fred Donckers, and E. Derhatl.  The total cost of the new Cathedral was in excess of $550,000.00. The money was obtained from donations, fire insurance, $100,000.00 from other parishes of the Diocese and the work of the Cathedral’s parishioners.

Services were offered in the new Cathedral proper on September 29, 1937 and the building was completed in September 1938. Formal dedication took place in the Summer of 1939. In December 1940, Bishop Plagens was transferred to the Diocese of Grand Rapids, Michigan, and on March 20, 1941, Bishop Francis Magner was installed at the Cathedral. 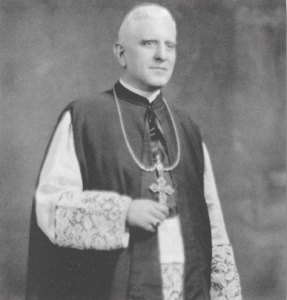 Monsignor Buchholtz died on February 13, 1945 after being pastor of the Cathedral for 29 years, longer than any other priest. Monsignor Buchholtz was so loved and respected by the people of Marquette that on the day of his funeral the businesses in the community closed and the Cathedral could not accommodate the huge crowd of mourners. Father Emil Beyer, who was the assistant at the Cathedral, gave the eulogy. Monsignor John Holland succeeded Monsignor Buchholtz as pastor in March of 1945. On June 14, 1947, Bishop Magner died and was replaced in September 1947 by Bishop Thomas L. Noa. 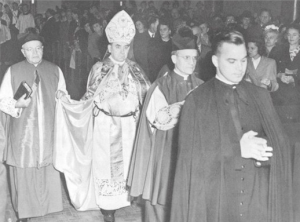 In 1947, the Cathedral was completely redecorated at a cost of $25,000.00 and at this time the mural depicting Christ’s presentation of the keys to St. Peter was painted above the High Altar.

Monsignor Holland resigned in October 1948 and was succeeded by Father Glen Sanford. Father Sanford was replaced in July 1950 by Father Nolan B. McKevitt who remained pastor of St. Peter for 25 years during which time he was elevated to Monsignor and ultimately to Protonotary Apostolic.

In the 1960’s alterations were undertaken to update the recent changes in liturgical worship brought about by the Vatican II Council. The High Altar was no longer used as the Council directed that the altar face the congregation. Therefore, the steps of the sanctuary were extended by use of a platform, a wooden altar was placed there, and the use of the Communion railing was discontinued. 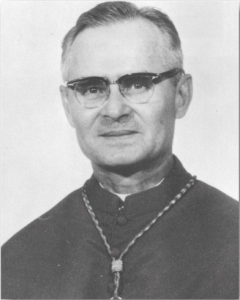 Bishop Charles A. Salatka was installed as head of the Diocese on March 25, 1968 and served until his appointment as Archbishop of Oklahoma City in the Fall of 1977. Monsignor McKevitt resigned in 1975, during Bishop Salatka’s tenure.  Father Louis Cappo was appointed Rector of St. Peter Cathedral and is the present rector.  Bishop Mark Schmitt, was installed on May 8, 1978. He had been auxiliary bishop of Green Bay, Wisconsin. 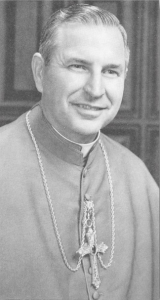 Plans for the redecoration of the Cathedral were begun in 1980 under the combined leadership of Bishop Schmitt and Father Cappo and the work was initiated on January 5, 1981.  The motivating factors for this new phase of redecoration were two-fold: first, to enhance the already beautiful Cathedral by instituting a generalized face lift to include painting and the adoption of better lighting, and, second, to update the Cathedral according to the new liturgical directives. The altar will be brought closer to the congregation. The Blessed Sacrament will be placed in the Bishop’s Chapel which will be renamed, the Chapel of the Blessed Sacrament. The total cost of these changes was estimated at $300,000.00 which was shared by the parishioners of St. Peter, the Diocese of Marquette, and the other parishes in the Diocese on an equal basis.

An interesting discovery occurred in January, 1981, when, while the workmen were removing portions of the marble work from the previous main Altar, a memorial stone for Bishop Baraga was uncovered. This memorial stone seems to have been broken into two pieces and used as an understructure for the altar.It was resealed in the marble work structure and recovered by the original marble. The final phases of this period of redecorating were completed in April 1981 to coincide with the centennial celebration observation. 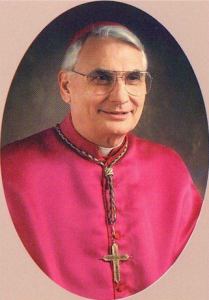 Bishop Emeritus James H. Garland was installed as the 11th Bishop of Marquette on November 11, 1992. He served the Marquette diocese for 13 years, retiring on December 13, 2005.  He had been Titular Bishop of Garriana and Auxiliary to the Archbishop of Cincinnati.

Upon Bishop Garland’s retirement, Bishop Alexander Sample became the 12th bishop of the Diocese of Marquette.  Bishop Sample was born Nov. 7, 1960 in Kalispell, Mont. He was ordained a priest on June 1, 1990 at St. Peter Cathedral in Marquette. After receiving his Licentiate in Canon Law in Rome in 1996, he returned to the Diocese of Marquette to assume duties in the Chancery Office. He was ordained and installed as the 12th bishop of the diocese on Jan. 25, 2006.  He was appointed Archbishop of Portland in Oregon on Jan. 29, 2013 and installed as archbishop there on April 2, 2013. 2013.

The present head of the diocese is Bishop John Doerfler. He was installed as the thirteenth Bishop of the Diocese of Marquette, Michigan, on February 11, 2014.