Bishop Frederic Baraga, first bishop of the Diocese of Marquette (from 1853 until 1868), was the first of many Slovenian missionaries to come to the United States to help build up the American Catholic Church.  Baraga’s two successor bishops in Marquette, Most Reverend Ignatius Mrak and Most Reverend John Vertin, attribute their missionary vocations to him as well.  The seminarian, St. John Neumann, was inspired to come to America after reading Baraga’s missionary accounts in Berichte, a publication of the Leopoldine Missionary Society in Vienna.

Frederic Baraga was born on June 29, 1797 in the castle of Mala vas in the Northwestern part of Slovenia.  Political upheavals in the Austrian Empire unwittingly prepared the young Baraga for his future as a missionary.  By the time he was nine years old, he was fluent in the Slovenian, French and German languages.  Orphaned at 14, Baraga went on to study law at the University of Vienna and graduated with high honors.

Catholicism in the Empire was under the thumb of the Emperor and frozen by the icy winds of Jansenism.  Frederic Baraga sought the advice of St. Clement Hofbauer, then living in Vienna, and was greatly moved by this charismatic man.  Baraga’s decision to study for the priesthood, work for religious reform in his own diocese, work with the Indian missions in America, and write prayer books can all be traced to Hofbauer’s influence.  When the time came to further the Cause of Clement Hofbauer, Baraga wrote in an 1865 letter to Pope Pius IX: “For three years I enjoyed the singular blessing of having as my confessor the Servant of God, a blessing I number among the greatest blessing Divine Providence has granted me during my entire life.”

Father Baraga arrived in the New World on December 31, 1830.  For the next 37 years he travelled the length and breath of the Great Lakes area to minister to the Ottawa and Chippewa Indians.  His first mission (Arbre Croche, 1833-1835) was established along the shore of Lake Michigan at present day Harbor Springs to Cross Village.  Fr. Baraga labored two years at Grand River (1833-1835) presently known as Grand Rapids, before moving his mission to LaPointe (1835-1843) and L’ Anse (1843-1853) on Lake Superior.

During the summer months, Father Baraga traveled on foot and by canoe.  During the winter months, he traveled on snowshoes thus giving him the titles of “Apostle of the Lakelands” and “Snowshoe Priest.”

He wrote long and frequent accounts of his missionary activities including a three-volume diary.  He also wrote seven Slovenian prayerbooks and authored 20 Native American books which inlcudes his monumental Grammar and Dictionary of the Chippewa Language, still in use today.  He was the first bishop to write a pastoral letter in both the English and Chippewa languages.

From 1840 to his death, he ministered to the immigrants who came to the Upper Peninsula of Michigan to work in the iron and copper mines of the region.  About the same time, he began the practice of rising at 3 a.m. in the summer and 4 a.m. in the winter to spend three hours in prayer, which he continued until the end of his life.

His responsibilities grew even greater when he was named bishop of the newly created Vicariate of the Upper Michigan.  He was consecrated bishop in Cincinnati on November 1, 1853.  The lack of priests and money weighed heavily on his heart.  Due to his hard work and dedication, Bishop Baraga was able to report to the Holy See a year before his death that his diocese rested on a firm foundation, with enough priests and churches for the fast-growing area.  Sault Ste. Marie was his See City until 1866, at which time he moved to Marquette-a more centrally located and accessible city by both ship and train.  In the Fall of 1866 while attending the Council of Baltimore, Bishop Baraga suffered a severe stroke.  Afraid that his fellow bishops would not allow his return to the severe climate and remote regions of Lake Superior, he begged the priest who accompanied him (Rev. Honoratus Bourion) to take him back to Marquette.  Understanding his bishop wanted to die among his flock, Rev. Bourion practically carried Baraga to the train for the long trip back to Marquette.

Bishop Baraga’s health improved somewhat and he continued to administer his diocese while anxiously awaiting the coadjutor promised him at the Council.  Death came to the Shepherd of the Wilderness on the early morning of January 19, 1868, the feast of the Holy Name to which he was especially devoted.  January 30, the day of his funeral, was declared a civic day of mourning in the city of Marquette.  In spite of the bitter cold and blizzard conditions, St. Peter Cathedral was filled to capacity and people stood outside the building to attend the funeral.  Both written and oral accounts from the time show that Catholics and non-Catholics alike believed that a Saint lived and died in their midst.

The conviction of Bishop Frederic Baraga’s outstanding sanctity continued to grow after his death. Several biographies have been published in both the Slovenian and English languages. The Bishop Baraga Association & Archives was established in 1930. In 1952, the Bishop of Marquette appointed an historical commission to collect and catalogue material pertinent for the cause of Bishop Baraga’s beatification. 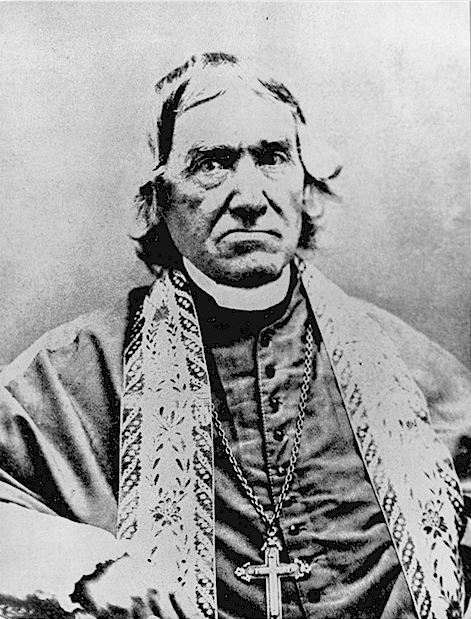 Support The Bishop Baraga Association with Your Membership

The purpose of the Bishop Baraga Association is to promote the cause for canonizing Bishop Frederic Baraga as a Saint and to make the example of his love of God and service of his neighbor known to all people.

Membership in the Bishop Baraga Association is open to everyone.  Members receive the quarterly Baraga Bulletin.